Cart (0)
No items in your cart
Total:
$0.00
Sign in to use wishlist
Choose
Settings
Choose
Diamonds 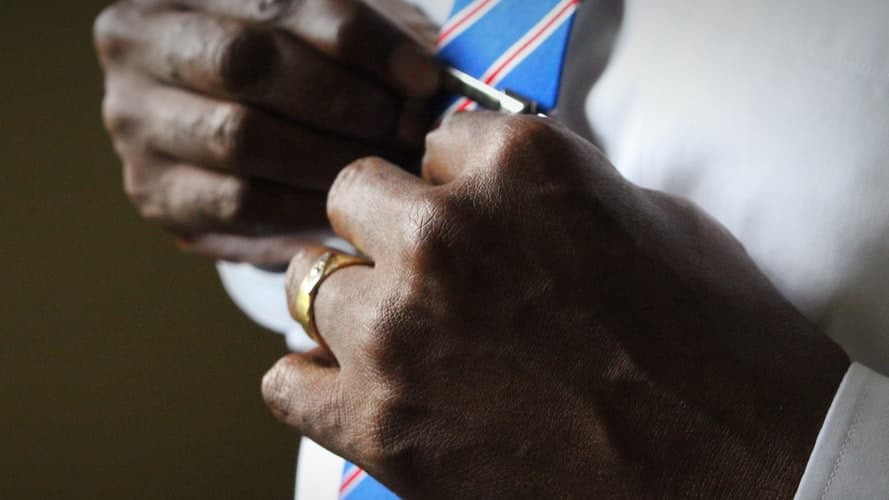 According to the New York Times, "wearing an engagement ring is a recent trend that became popular in America after World War II." Traditionally, it was uncommon for men to wear these rings, but this has changed. Men were initially only given their partner's wedding band as a symbol of love and commitment. They would replace it with another non-engagement typeset while still having her original one on hand, so there isn't any confusion about who owns what items. Nowadays, some choose not just because of tradition or symbolism. Many people do it out of respect for the woman who gave them their ring (or lost hers) by wearing it around their necks.

THE HISTORY OF MEN'S ENGAGEMENT RINGS

Men didn’t start wearing a band until the mid 20th century. In the 16th and 17th centuries in Europe, men sometimes wore something called Gimmel rings, which consisted of two interlocking circles. During World War II, this idea carried over to America that wedding bands for males started gaining prominence after people began feeling close again, with lavish white weddings being promoted as symbols of the American Dream post-war prosperity following WW2.

The jewelry industry has always been at the forefront of innovation and trends, but it is especially now. In 2009 H. Samuel jewelers began designing a more budget-friendly titanium engagement ring for men called The Tioro Ring after noticing how popular women's engagement rings had become over time compared to their traditional wedding band designs. These $204 rings are just as fancy, if not fancier, compared to what many people would expect from an average woman's ring ($5,431 on average), with only half the width (less than 1cm). It won't break your bank account if you want one too!

What Do Men look for in Engagement Rings?

When you're getting married soon and don't know what type of ring to get your man, think about his aesthetic- is he a sporty guy, rocker, or white-collar professional? You'll also want to consider his lifestyle - does he enjoy weekends fishing in jeans and flannels? If these factors determine that a simple traditional gold band would be better for him, then it's time for an engagement! The most popular ring styles worn by men are plain and simple yet timeless. The most popular metals are rings with silver-colored metals (white gold, tungsten, tantalum, or platinum) as well as yellow gold.

We all have certain things that we do not like about our appearance, but men may be more reluctant to admit their aversion to wearing rings than women. It is pretty standard for men not to wear rings. Many people are unaware that there is a tradition of wearing rings on the left ring finger. However, this tradition doesn't mean that all men should be expected to follow it. There is nothing wrong with a man choosing not to wear a ring, and there are plenty of other ways he can show his love for his partner without one. There is still an unfortunate stigma surrounding married men who choose not to wear wedding bands for various reasons; some even worry about being judged by others for only choosing one special woman in their life. The thought of having this judgment put on them makes many feel uncomfortable enough that they decide not to purchase any ring at all. One of the main reasons that guys don't wear engagement rings is that many of them find it uncomfortable, but wearing your band around your neck solves this issue! It's also good if you're worried about losing or damaging an expensive investment from all those job sites where you work in construction. Just make sure not to lose both parts when taking off each day: leaving without one isn't getting married after all.

Who buys the groom's ring?

Tradition says that it's the bride-to-be who selects and buys her groom's wedding band. The best way to shop for a man is by gathering information about his taste in jewelry before going shopping. In particular, ask him what type he likes: gold or silver; matte or shiny? What does he like more than anything else—curved lines vs. angular ones? Keep these questions in mind as you visit different stores to help narrow down which store will be most successful when finding something perfect for him! Furthermore, The Knot featured a survey several years ago that showed that 5% of newly engaged men are rocking their "taken" status to show off the engagement ring they've been gifted with. This trend has taken over within the jewelry industry. Some jewelers have even marketed rings exclusively for males who want something more subtle and masculine than what is typically seen when gifting an engagement ring to someone you love.

WHEN DOES A MAN WEAR AN ENGAGEMENT RING? About half of all gay couples get engaged by exchanging rings. Many same-sex couples opt for engagement rings similar to what traditional husbands might wear on their wedding day. Now, jewelry designers are creating specifically designed engagement ring bands geared towards gay and lesbian partners everywhere!

In what cultures do men wear engagement rings?

In some cases, like in Chile, where they wear engagement rings on their right hand during the engagement stage to signify an emotional commitment. When it comes time for marriage, men may also take part by wearing an engagement ring, but usually only if he's planning to be married soon after, as is tradition with women who get engaged and move on getting married.

What hand does a wedding ring go on for a man?

When a couple gets engaged, the ring presented is like an oath of marriage. That’s why it goes on the same hand and finger as their wedding rings. So people who are getting married often wear those rings on the fourth finger of their left hand in anticipation for that day when they tie the knot with someone special to them!