Cart (0)
No items in your cart
SUBTOTAL:
$0.00
Sign in to use wishlist
Choose
Settings
Choose
Diamonds

The Meaning Behind the Ring Finger 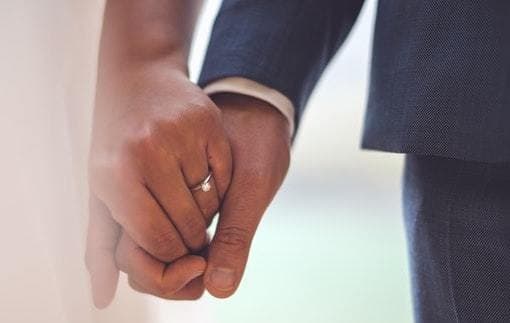 About to get engaged or married? Then you may be wondering which finger to wear the engagement and wedding ring(s) on. In 2018, tradition holds less sway than it used to when it comes to marriage rituals. Some people like to stick to the old romantic traditions, while others decide to buck the traditions based on comfort, personal preference, or a desire to forge their own path. This can probably be said for many different countries and cultures, but it’s especially true in the U.S.

So, which finger is the ring finger?

In the U.S., the ring finger is traditionally considered to be the finger between your pinkie and middle finger (aka your fourth finger) on your left hand. Wearing a ring on your ring finger represents your relationship status, whether that be engagement, marriage, or a long-term monogamous relationship.

Women usually wear an engagement ring after they accept a proposal, and add a wedding ring to complete the set once they’re married. Men typically start wearing a wedding band on their ring finger once married. However, there’s an emerging trend where some men are wearing engagement rings before they get married. For same-sex couples, a ring on the right hand usually signifies that someone is in a monogamous relationship — whether that’s a long-term partnership or marriage.

Traditions are a bit different in other countries. In India and Spain for example, the engagement and wedding rings are usually worn on the right hand.

Increasingly though, in many countries either hand is considered appropriate for the engagement ring and wedding ring; the important part is that you wear the ring on your fourth finger.

What’s the history of the ring finger tradition?

Many believe that the origin of this custom dates back to the Romans, who believed that the ring finger had a vein running directly to the heart. They called this the Vena Amoris or the “Vein of Love.” Although medical science has shown us there’s no such vein, the tradition still lives on today.

Due in part to the old concept of the Vena Amoris, wearing a ring on the fourth finger represents a connection to the heart; it’s associated with affection, love and creativity — all important ingredients for a happy marriage.

What’s the history behind the wedding ring, engagement ring, and promise ring?

The wedding band originated about 4,800 years ago in Egypt, and it has persisted throughout history as a symbol of unending love. The circle shape represents eternity and the infinite, and the exchange of rings represents a couple’s eternal love.

The engagement ring is a more recent phenomenon. In 1477, Archduke Maximilian of Austria presented his fiancee, Mary of Burgundy, with a diamond ring crafted in the shape of an M. This was the first recorded use of what we think of as an engagement ring today. From the 1470s to the mid-1900s, diamond and gemstone engagement rings waxed and waned in popularity among the aristocracy and the wealthy; meanwhile the lower and middle classes exchanged rings made of wood, stone, or simple metal to signify a betrothal.

Finally, in 1947 the marketing slogan “A Diamond is Forever” was born, and the diamond engagement ring quickly became the ubiquitous proposal gift that it is today.

For some couples, a promise ring is a more appropriate way to mark their relationship status. The promise ring dates back to the 1500s, when it was used as a way to indicate wedding plans sometime down the road. Today, it can be used to represent a future engagement, or simply an exclusive relationship. Promise rings are especially popular among younger couples who intend to marry someday, but who may not be ready to set the date quite yet.

In the end, a ring is a token of a couple’s love and commitment to each other. Like the ideas and emotions it represents, rings come in countless different forms. Find the perfect promise, engagement, or wedding ring now.

What is a Shared Prong Setting?

In a shared prong setting, each stone shares one set of prongs with the stone next to it.

What is a Hidden Halo Engagement Ring?

Hidden halos are trending. Learn what a hidden halo is and what it looks like here.

How Thick Or Thin Should My Engagement Ring Be?