Rose gold, sometimes called pink gold, is everywhere these days. And it’s no wonder why – its soft, luxurious hue is unique and breathtaking.

Even though rose gold has become incredibly popular in the past few years, it’s not actually new to the jewelry world.

The Invention of Rose Gold

Rose gold came to fruition in the early 19th century by the jeweler Peter Carl Fabergé. Fabergé incorporated rose gold in his renowned Fabergé Eggs. The jeweler was tasked with creating these ornate eggs to be Easter gifts for Russian tsars Alexander III and Nicholas II’s family. 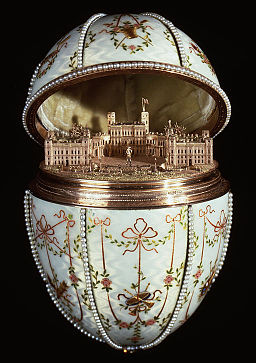 Rose gold became so favored in Russia that people began referring to it as Russian gold.

Platinum and white-colored metals were favored during the Art Deco period. But when World War II began in 1939, platinum became reserved for war efforts and could not be used by jewelers. Rose gold took its place and became the most popular metal at this time.

Rose gold has made a very big comeback in the past ten years. Of course, celebrities are always setting trends when it comes to fashion and jewelry. The obsession for rose gold was once again fueled when Blake Lively’s rose gold engagement ring was first spotted by the paparazzi in 2012.

The same year, Leighton Meester was also proposed to with a rose gold diamond ring.

And it’s no surprise which engagement ring was the most pinned in 2017 on Pinterest.