What is a Toi Et Moi Ring? 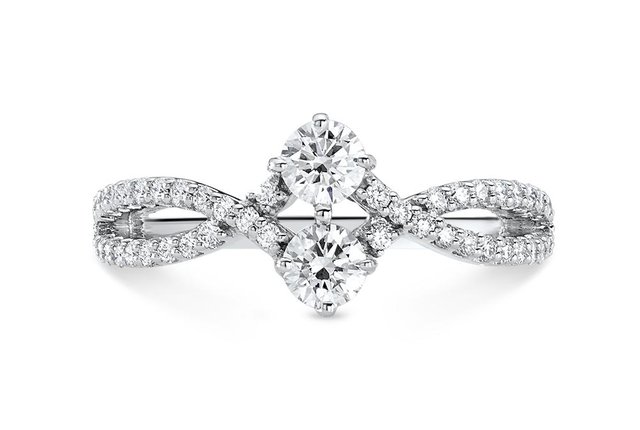 ​Toi Et Moi, translating to "you and me" in French, is one of the most romantic engagement ring styles you can find. Traditional rings are built with one major center stone, but Toi Et Moi or also referred to as two-stone engagement rings are created with two entirely different stones nestled closely together. In many cases, the two stones are set so closely that they are touching. This placement of the gemstones is to represent the commitment and love between two individuals coming together in marriage. ​

​The History of Two-stone Rings​

​While the Toi Et Moi engagement ring style might be trending now, it is not new. This ring style is hundreds of years old and came into style after Napoleon Bonaparte proposed to Josephine de Beauharnais back in 1976! Napoleon was still a soldier in the French army at the time, having a limited budget. The ring is very simple, but the blue sapphire snuggled up to the diamond makes the ring an eye-catcher. Their ring was recently auctioned for over 1 million dollars in the early 2000s. ​

The best part about choosing a two-stone engagement ring is that you get the flexibility to customize the ring even more! Some people choose to set one traditional diamond alongside a colorful gemstone, perhaps even birthstones! Since this ring style is already built on symbolism, taking the time to truly think through which stones you are using could make it even more romantic. Gemstone engagement rings have a long history of having their own unique meanings. For example, a ruby is July's birthstone that also represents love, devotion, and passion.

Not only does buying a two-stone engagement ring give you the ability to customize the two main stones, but you still have the settings to choose from! Some people enjoy the simple solitaire bands in order to let the main stones be the center of attention. Other people, like Jackie Kennedy, surround their Toi Et Moi rings with other brilliant stones in halo engagement ring settings. Remember that your engagement ring is a symbol of the incredible relationship you have with your partner. Take the time to customize your ring in a meaningful way!

​The iconic first lady, known for her style, wore a two-stone engagement ring from John F. Kennedy that featured a 2.88-carat emerald-cut diamond and a 2.84-carat emerald gemstone.

When Sebastian proposed in 2018, he did so without a ring, so the two got to design the ring together. The couple selected a pear-cut and a princess-cut diamond, with an estimated total carat weight of about 7 carats. This ring really launched the recent two-stone ring trend.

Ariana Grande’s engagement ring from her now-husband, Dalton Gomez, features an approximately 5-carat oval cut diamond with a sentimental touch: a pearl from her beloved grandfather’s tie pin. The oval diamond is slanted towards the pearl, creating a truly unique look.

Did you know Megan Fox’s engagement ring is currently the top searched-for celebrity ring on Google? Megan Fox’s stunning engagement ring from Machine Gun Kelly features two pear-shaped stones: an approximately 2-carat diamond and a 2-carat emerald. The two stones, which create a heart-like shape, represent the couple’s birthstones - emerald is May’s birthstone (Megan’s) and diamond is April’s birthstone (MGK). The ring can come apart and is joined together by a magnet. The artist also noted that the ring contains thorns in the band so that it hurts when she takes it off. After Megan Fox received this ring, requests for two-stone rings surged everywhere. ​

​Tips for Choosing The Best Gemstones for Your 2-Stone Ring